Reading History to Get to Know Your Welsh Ancestors Better

What Does Your Occupational Surname Say About You?

Our previous videos in this series are surname origins, place surnames and surnames of relationship.

Many of those who had a trade or occupation in days gone by, just adopted that as their surname. In England, surnames of occupation typically accounted for 10-20%, while they were less frequent in the other countries of the United Kingdom.

Smith is the most common surname in both England and Scotland. A smith was someone who made something – like a blacksmith, goldsmith or swordsmith. Tailors were very common. There were a large number of occupations, such as baker, mason and shepherd. The surnames of Office were typically those who either had an office e.g. duke, priest or worked as a servant of others in some way e.g. butler, page.

It can be revealing to look at the geographical spread of a surname, particularly one that is less common. For example, this example shows the frequency of the surname Messenger in the English counties in the 1881 Census. It shows that the surname was most common in Cumberland, but also occurred in Oxfordshire and Hertfordshire quite often, but not in many others. This can be because someone moved many centuries ago to another county, increasing the frequency of it occurring there.

If you’ve got an ‘Occupation’ in your family tree, and would like to know more, please get in touch with us to book your free consultation. We will have a look for you, then get back to you with our suggestions of how we can help to bring your ancestors to life. 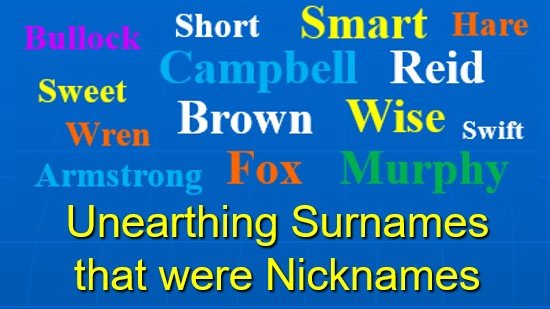 Unearthing Surnames that were Nicknames