Discover the invaluable part genealogy search plays in retelling your ancestor stories so you can walk in your ancestors’ footsteps. In tracing your family roots, professional genealogical research can help to break down brick walls, as well as finding family members that you never knew about or have never met.

Let us connect you with your ancestors’ lives, trace your family back in time and provide a fascinating report with maps showing exactly where your ancestors lived. Contact us for a free discussion about your requirements

What do we do to trace your ancestry?

We go in search of your ancestors firstly by identifying where your ancestors lived, worked, went to school and played. Our report will include maps which show where family locations were. Among the challenges are to find out exactly where these houses or buildings were; and if they’re still there! Contact can be made with the current occupants – who are often delighted to show the descendants round. Can the places that they went to school or worked be found? A building that has almost always survived is the church that they went to. A gravestone can be very poignant. Then there is the history and social climate of the times in that area. We use a range of sources to explore this; and what it may have been like for the family. There are bound to be surprises!

What is the Ancestor Footsteps report?

The report that we produce for you about your ancestors will bring them to life in many ways. But nothing beats the unique experience of visiting where they actually lived to touch and feel what their lives were like. We can help you follow in your family’s footsteps in many ways.

Can you help organise family reunions?

Yes, we do. This is a personalised event that many family members from around the world can enjoy, but takes a lot of organising, is a Family Reunion, complete with programme of talks, visits and social events . As well as finding out all about the family locations and history, there is the need to organise good, knowledgeable speakers for the programme and arrange the visits. Then all the administration of finding venues, arranging meals, travel and accommodation, making bookings and advising on what to see.

Can you help me to visit my ancestral lands?

We offer a guide to family locations, including other points of interest, can be shared with family members, enabling them to visit when convenient for them. Examples include one in the East End of London, passing the site of one of Shakespeare’s theatres; and in Cumbria, where a family house that had been there for 500 years, had only finally been demolished a few years before.

We can help you in whatever way suits you best. From just giving advice, to teamwork where we work together on a project, to one of our professional genealogists organising and accompanying you on a genealogical visit to your ancestral lands or organising your personalised family history event. Please get in touch on 07810 370312, e-mail info@researchthroughpeople.com or fill out a form and we will respond within 24 hours. We look forward to bringing your ancestors to life. Thank you.

Some highlights of recent genealogical visits include:

The Farleys were convinced they were Yorkshire born-and-bred but we found they had arrived there via Lancashire and Kent from Devon. So, their next holiday was spent exploring the places where their ancestors had lived in Devon.

The Abbotts had lived near London since the 18th century. But we found living relatives in Canada, Australia and New Zealand, all of whom had family documents and letters from long ago.

The Caldows had emigrated from Ayrshire to Australia in the 18th century. We found 5 farms where the family had lived in the first half of the 19th century; and arranged for 3 of the current occupants to show her round their homes.

The Rutter family had lived in a rural area of Cheshire for many generations, marrying people from places within a few miles. We found places that they had lived and worked e.g. railway; farm; garden.

The Grahams had lived at Kittochside House, East Kilbride for 2 centuries before emigrating to New Zealand in 1864. The current owners were delighted to show the living relatives round when they visited UK.

The Morris family helped Swansea to have more than 50% of the world’s copper trade; created the first purpose-built workers’ village, Morriston; and were responsible for the world’s first passenger carrying railway. The 3 day trip we organised included visits to Archives, Museums, local historians, family locations; and dinner in ancestors’ homes.

Noble, Slade and Pierdon. Both husband and wife had English and Scottish ancestors; and did a 3 week trip to UK with their children. This included Dundee, where many family members had gone to school, worked in the jute industry and been buried.

Hunter – this rewarding day started in Tarbolton, Ayrshire where the descendant was blown away to learn that his ancestor was the publican when Rabbie Burns and the Bachelors Club met there in the 1780s.

What our customers say

“I want to say that the presentation and lay out look fantastic. You have described the setting nicely and I am now keen to visit the birth place of my ancestors. I loved the added maps.”
Alison DNZ
“Thanks again for your great contribution to the background information of our soldier, railwayman and patriot.”
Jim HCanada
“Wow! I’m speechless at the research you’ve done and the material unearthed. 90% was new to me! I knew almost nothing about my mother’s family before my grandparents. I now know them a lot better and have a thirst for more. Very pleased with it.”
Bob AEngland
Previous
Next

Ancestral Research is Thriving Around the Globe 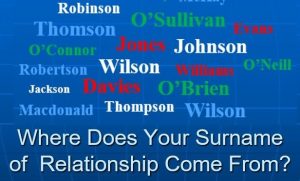 Behind Surnames of Relationship: English, Scottish, Irish and Welsh examples

Ready To Trace Your Ancestor Footsteps? Send us your ancestor questions and research goals

If you prefer, you can also email us direct:

Or call us for an informal chat