Behind Surnames of Relationship: English, Scottish, Irish and Welsh examples 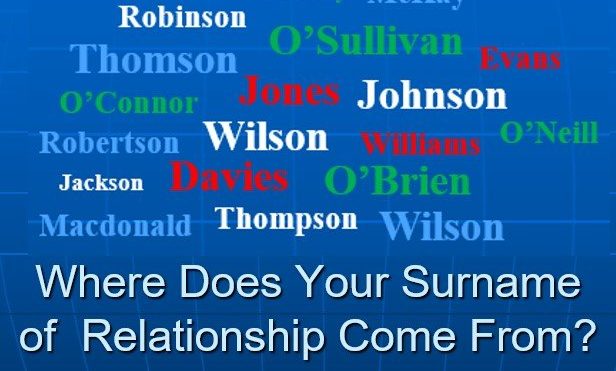 Our previous videos in this series are Find Out Where Surnames Originate and Where Does Your Local/Place Surname Come From?

There are 4 main types of surname. Here we will look at Surnames of Relationship. These could be patronymic (literally ‘father name’) originally adopted by a son from their father; or fealtic where there was no blood relationship but the person took the name of the clan they joined or of their lord or master.

We also look at the most popular surnames in England, Scotland, Wales and Ireland; and how many of these were surnames of relationship or other.

Examples in the different countries are:

In Scotland, there were many that followed the practice of adding ‘son’ to the father’s name, particularly in the Lowlands. Being part of a large, powerful clan was important in the lawless Highlands. Followers would swear allegiance to the Clan leader in return for protection and support, although they had no blood relationship with him. 5 of the 10 most common surnames in Scotland are surnames of relationship, including the clan Macdonald.

Servants and others employed in noble households would often take the Surname of their master. For example, in a database (England’s Immigrants 1330-1550) of people who migrated to England between 1330-1550, there were 264 people with the surname Fleming. Of these, 50 were servants, suggesting that taking the noble surname was a common practice.

Wales had started a Patronymic naming system back in the 10th century, adding ‘s’ to the end of a name. The objective was that a person’s genealogical history should be known. By the 14th century 50% of names were patronymics, with 70% in some areas. All 10 of the most common surnames in Wales are surnames of relationship.

Mac and Mc can be both Scottish or Irish?

Ireland also adopted hereditary surnames from the 10th century, using Mac ‘son of’ or O’ ‘grandson of’. Society was organised around the family. 6 of the 10 most common surnames in Ireland are surnames of relationship.

So… if you’ve got a -son, Mac-, Mc-. -s or O’ in your family tree, it’s a safe bet there will be others with the same surname not too far from you. Please get in touch to book your free consultation, if you would like us to help to bring your ancestors to life.