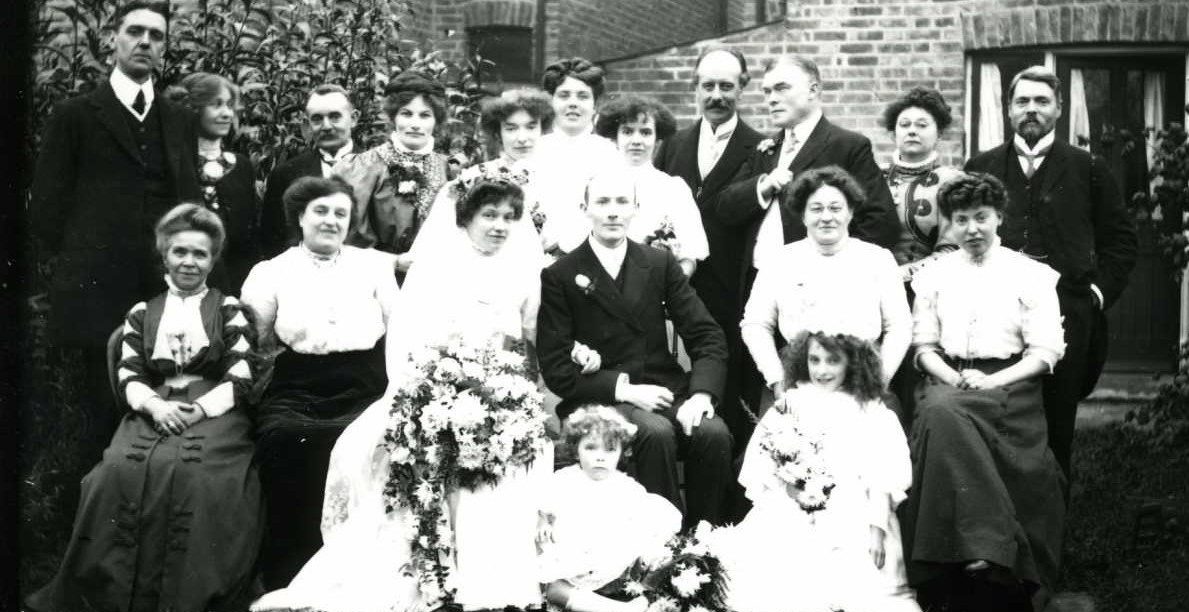 This is for those of you who have ancestors from the green and pleasant land of England. To give you an idea of what may be involved in bringing your English ancestors to life with family history research, England has had a long and fascinating history stretching back to Alfred the Great and before. In more recent times, the 1700s saw the Georgian age and start of the Industrial Revolution. The 19th century saw many leave the land to work in the flourishing new industries; and the coming of the railway. Families were large because a number of their children were expected to die young.  And people died of illnesses that are easily cured now.

We’ll start by telling you a bit about researching ancestry in England, and then use some examples to help you understand what may lie ahead for you.

The map shows England and the various counties. Big cities like London, Birmingham and Manchester. Your ancestors may have come from the North, Midlands, South West, East Anglia or the South East. With many different characteristics but with a lot of common history.

Your ancestors may have stayed in the same place for many generations or moved somewhere else. Over the centuries, people have moved, both within England and gone abroad. And many from other countries have come to England.

In the 16th and 17th centuries, many Huguenot and other refugees from the Low Countries and France came to England during the Reformation. The Industrial Revolution had a tremendous impact, not just on England, but on the whole United Kingdom, who led the world in becoming the first industrialised nation. The Great Famine in Ireland in the mid 19th century caused a million deaths, and another million who immigrated to England, Scotland and other countries. The growth of the British Empire led to many people from England emigrating to USA, Canada, Australia, New Zealand and many other countries.

Success in searching for individuals and families depends on whether a) what they did was recorded, b) such records have survived and c) they can be found.

As discussed in Bringing your Scottish Ancestors to Life, four main factors affect success, apart from persistence and the ability to find ways to solve problems, and they include, Status, Records, Name and Continuity. There are differences in records in different countries – Registration of birth, marriage and death started in England in 1837, but the Scottish records have more information.

With the coming of digitisation and the internet, records are far more accessible than they used to be. So, we can do far more for our clients than we could have done even five, 10 years ago.

The Rutter family had lived in Cheshire for many generations, although the client had moved to Scotland. In the 18th and 19th centuries, they married people from places within a few miles. Their occupations reflected what was happening where they lived. Thomas Rutter was one of the first to work on the railways when they were first built. His son Thomas was a gardener; and his son John worked on a farm in the early 20th century when the area was still largely rural.

This person was born during World War Two and had been adopted. We found that his adopted parents had a fascinating ancestry going back to both Wales and Ireland. A meeting was arranged with the adoption adviser who told him that his natural mother was Norah Robson, with an address in Hampshire. The Electoral Rolls played a key part in finding the Robson family. Then the 1911 Census showed that Norah had been born at the other end of the country, in Newcastle, in 1910. Her 1946 marriage; and eventual death in Sussex in 1986, were found, then contact was made with a nephew of hers, who had photos and lots of information about Norah’s life to share with her son.

The Shirt family were traced back to the East End of London in the 18th century. They lived in London while its population grew in the 19th century from 1 to 7 million, with all the consequences that had. They then moved to Warwickshire where Daniel Shirt married Frances Nixon in 1942. They had 2 sons, but divorced after the War, with one son going with his father while the other lived with his mother. There had been no contact between the 2 brothers for more than 50 years, but we were able to track down the other one and put the families in touch.  The recently released 1939 Register played a part here, including finding that Daniel’s father, Daniel had remarried after his first wife had died, which was unknown to the family.

There was a very interesting story about how his father John came to go down to Sheffield as a gardener. The 1851 Census showed him lodging with Jane Campbell from Ayrshire, along with 3 other young gardeners, 2 of whom also came from Scotland. Also, on the page was John Campbell, gardener employing 30 men; and George Wolstenholm, manufacturer. It turned out that George Wolstenholm’s company manufactured steel knives and razors; and John Campbell was Head Gardener at his Kenwood House estate, and the son of Jane Campbell, with whom John Buchanan was lodging.

Can we help with your English Family History Research?

They all show how we can bring your ancestors to life, with many surprises. Because of developments in communication, we can achieve so much more for clients than even a few years ago. We give a free consultation; then come back to you with a choice of options. What’s important is that you know how much it’s going to cost; and we know how far to go with our research. There is currently a 10% introductory discount – just quote ‘Explore 1’. Please feel free to Contact us. We look forward to hearing from you.