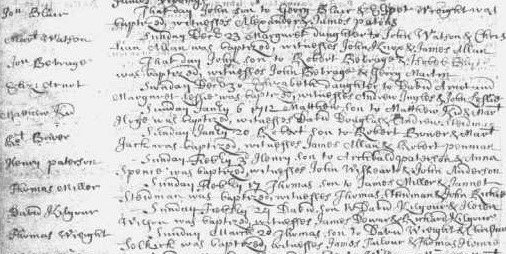 “I’ve finally found this old record for my ancestor – but I can’t read it!” It’s a common complaint!

Much of family search genealogy is about the expertise to know where to look to find records. There are 3 key questions: 1) did your ancestor do something that was recorded?; 2) has it survived?; and 3) can it be found? And with old records, fewer events were recorded, they are less likely to have survived, and finding them is harder! Luck may play a part in finding it. Then there is the ability to read it, particularly old handwriting. Many of the letters were different as was the writing; and there was widespread illiteracy.

The study of old handwriting is called Palaeography. Many documents written before 1800 are hard to read for someone today. Not only were the handwriting styles unlike today’s, but many of the letters were written differently. Reading old records can even be a challenge for professional genealogists!

A wee genealogy story to illustrate this.

Philip Delano was born in Leiden, Holland in 1602 and went to New England on the Fortune in 1621, the year after the Mayflower. The earliest known record of his family is the 1575 baptism of his father Jean de Lannoy in the Church of St Christopher, Tourcoing, then in French-speaking Flanders. But, this wasn’t finally found until just a few years ago.

The first Baptismal Register for St Christopher from 1573-77, which included Jean’s baptism, was only discovered, stashed away in the tower, in 1897. Back in 1578, Catholic troops broke into St Christopher during the Reformation; it is thought that the Registers were hidden then.

In 1899, a remarkable Genealogy and History of the Delano/de Lannoy family was published. But Mortimer Delano had bad luck because he had contacted the Tourcoing Archives in 1895, just 2 years before the Registers were found.

I went to the Archives of the Department of Nord in Lille in 2004. Something I have learnt to do in my career is to build relationships. So, Michel Vangheluwe, in charge of conservation, kindly showed me round and helped me to choose what I would look at. But we were unlucky – the records which included the 1573-77 Baptismal Register had been wrongly labelled as ‘from 1590 to 1800’. So, we did not select them.

Over the next year, I discovered that the Director of Tourism for Lille was Jean Delannoy. Having made contact and discussed our possible shared ancestry, we met at Jean’s house during my 2005 visit. We set off for the meeting with Michel Vangheluwe at the Archives which Jean had very kindly set up. But more bad luck as Michel’s mother had died and the meeting had to be cancelled. The consolation was that Jean took me home, where his wife Simone cooked a delicious lunch, washed down by some lovely Burgundy wine.

So, we had to wait until 2007 for Jeremy Bangs to fortunately ignore, for some reason, the wrong labelling and find Jean’s baptism entry:

Can you read that? Not only old writing, but in French! The story wasn’t over because Jeremy struggled to read some of the words. So, it took me to use the relationship I’d made with archivist Laurence Delsaut, to finally decipher the full entry:

It was the correct record because it was known that Guilbert was Jean’s father from records found in Leiden, Holland, including Jean’s marriage in 1596, when he would have been 21. Crucial in this record was that it gave us the precise district, Verdequeue, on the west side of Tourcoing, where Guilbert de Lannoy and family lived; as well as Jean’s godparents. So. Philippe de Lannoy is one of very few of the first Pilgrims whose parents, grandparents and precise origin are known.

A final irony was that José Barbieux, curator of the Tourcoing Centre for Local History, had very helpfully taken me round various historic places in Tourcoing in 2005. We went to the tower in St Christopher and he had shown me where the Registers had been hidden before being found in 1897. But, at the time, neither of us realised the significance that they contained Jean de Lannoy’s 1575 baptism record!

So, the de Lannoys were not only affected by history, leading to them fleeing from Tourcoing to England around 1579, but history was the reason that the Registers were hidden for so long.

That’s the thing about your family history. You never know what you’re going to find. Your ancestors may have stayed in one place for many generations, experiencing the changes taking place all around them. Or they may have migrated to another area or even country, like the de Lannoys. Whatever, they will have an interesting story to tell.

If you like us to help you, please get in touch. We do a free consultation where you give us brief information about what you know, we have a look, and come back to you with our suggested options. That way, you know what it will cost, and we know how far to go with our research. Our contact details are on the website. You can get in touch via our Contact page, or you can email info@researchthroughpeople.com. We’d be delighted to hear from you.

PrevPreviousResearching Your House Through Time
NextResearching your English Family HistoryNext