Researching Your House Through Time 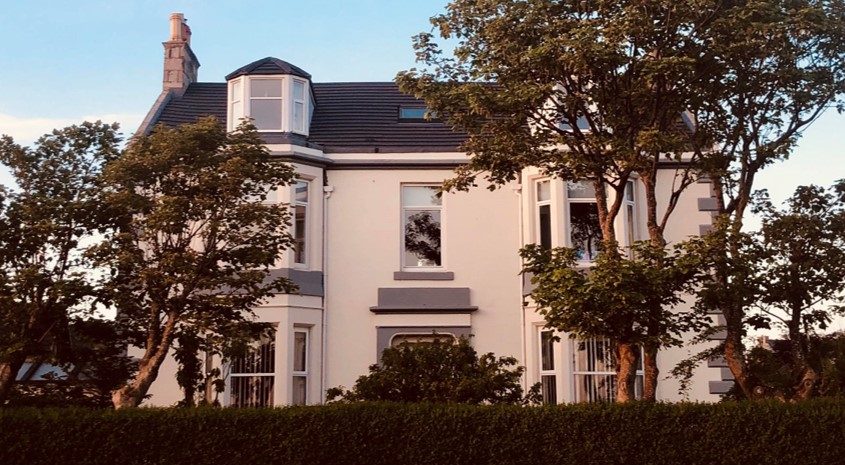 What I want to talk about, as opposed to researching your ancestors and where they came from, is researching the house that you live in. People come and say, “I live in this interesting old house. I wonder who lived here beforehand?” So, this video is about Researching Your House Through Time.

We’ll give you some examples of where we’ve done this for people who wanted to find out more about their old house, and bring the former inhabitants to life. Because, of course, these were people with a background, with family, and things that happened to them.

Success in tracing individuals and families depends on whether a) what they did was recorded, b) such records have survived and c) they can be found. There are four main factors in tracing ancestry; and particular ones are important in this case.

What I’m going to do is show you three examples of this, which will give you a flavour of what may be involved. Particularly if this is something that you’re thinking of doing yourself.

This house, Silverae, is in Ardrossan, on the west coast of Scotland, looking out over the sea. A lovely old house.

Here is an old photo of North Crescent, Ardrossan in 1910. A row of very nice houses from more than a hundred years ago. It shows the beach, and the sea is to the right of the people.

Here is an aerial view of Ardrossan today. The sea is just off to the left, and there is North Crescent, with Silverae marked.
The current occupants had found out a bit about one of the early owners Hugh Boyd. Interestingly enough, he was a ship owner, living by the sea. There’s a naturalness about that.

One of the first things we did, was to look back in the past. Here’s a map of North Crescent back in 1855. You can see no houses then, apart from one remote house to the north. Clearly, other houses were built after 1855. If we look at 1896, there’s a row of houses, including Silverae. You can see the big factor that influenced that: the railway. The railway came, in most places, in the middle or latter half of the 19th century. That meant people could live a long way away from their work. So, on the West coast of Scotland, people could work in Glasgow and live on the coast. That applied all over the country. The maps show us that Silverae must have been built in those 40 years.

We went to the Census and sure enough, in 1891, there’s the house. Living at it is Hugh Boyd, retired ship carpenter, born in Irvine, which is quite near to Ardrossan. He’s aged 66, and there’s his wife, Margaret Boyd or Gibson, possibly her maiden name. In 1901, there the house again, but Margaret is now a widow. Clearly, Hugh has died in the 10 years between that.

So. we followed that up; and looked in the newspapers. Hugh Boyd ‘Well-Known Ship Owner’ had his obituary in the Glasgow Herald in 1893. It tells us that he died suddenly at his residence etc. And “25 or 30 years ago, Mr. Boyd had several vessels engaged in the North American timber trade etc”

Hugh Boyd, the ship owner who lived in this house, is coming to life.

Again, in the newspapers, we found a report that he had a ship he bought in 1876, which was called the F W Cochrane. Hugh then named it after his wife, Margaret Boyd. It had been outfitted by Messrs Barr and Shearer. And then it was on the North Atlantic trade, going across to Canada and America, In 1877m it struck ice and was damaged. 1878, mutiny by the crew and the ship was abandoned. And then in 1881, again it was abandoned on its way back from Canada due to violent hurricanes, with a cargo of 217 standards of deals (an expression they used to use for the goods that the ship was carrying). And Hugh Boyd also lost another ship, the Anetta, in storms in 1881. That doesn’t sound very good.

Now building up a picture of Hugh. Going back in time, in 1881, Margaret and he were living in a hotel in Ardrossan. It seems that they did not have any children. We know he’d acquired the land for the property in 1877, this was in the deeds. So, it may well be the family were living in the hotel while the house was actually being built.

Going further back in time, in 1871, Hugh was a ship owner, but in 1861, he was just a carpenter. The deeds actually show that the land was gifted to Hugh Boyd. You wonder if he was someone who was a relatively humble carpenter, and then got this gift of a property and maybe other assets, enabling him to become as ship owner.

Looking a bit further, we found that, after Hugh died in 1893, his wife Margaret died in 1901, so they spent the later years of their lives at Silverae.

The Commercial Directory of Scotland showed the new owner, Alexander Bain, who was living at Silverae in 1903. He could be researched to grow and grow the story of Silverae over time.

Now let’s take a look at another house through time, at the other end of the country, in London.

In 1760, Edward LOUGH moved from Winskill, Cumberland to Enfield, Middlesex. Among his ten children were John, born in 1772, and Richard, born in 1776. A  number of their children and grandchildren became ham dealers in the East End of London. These included John LOUGH, son of John LOUGH and Charlotte LILES, who was born in 1807 in Enfield. John married Sarah SKEATES on 30 March 1828 at St John the Evangelist, Lambeth, Surrey. They would have fifteen children between 1828 and 1845, all of whom were baptised in Christ Church, Spitalfields, designed by Nicholas Hawksmoor. Four of their children, George, William, Ann and Charlotte also became ham dealers. We’ll not look at their house now but finish with it, because there’s an interesting story about what it is now.

John LOUGH, wife Sarah and their family lived on Brick Lane, which is in Spitalfields in the East End of London. Brick Lane was very much a trading street in those days. This old photo shows lots of stalls, with people busy buying goods.

Here is the Lough family in the 1841 census, which only recorded Brick Lane, not their house number, which was 181. John LOUGH’s mother, Charlotte (LILES), is still alive and living with him. There are the 5 children, and John’s a dealer in ham.

What’s happened to the houses today? The house that the Loughs moved to, No. 65, is an estate agent. No. 77 is now an Indian and Bangladeshi restaurant ‘The Famous Curry Bazaar’. Nowadays, Brick Lane is well known for its curry houses. And here are Lough family descendants from UK, New Zealand and Australia, able to go and have a meal at ‘The Famous Curry Bazaar’ in 2018. Their ancestors had lived there more than 150 years before!

Last, we have Kittochside House, a nice old house outside East Kilbride. The house was probably built in the early 1800s, but there is a wall at the rear dated 1610. So, a building has been there for 400 years.

We looked at the census, and here we have the Graham family in 1851. John Graham is the head, he’s 69 and a Justice of the Peace. His son, John, is a farmer, with his wife and his family of 5 children.

Let’s take the two Johns and son Andrew, and put them in an ancestry chart. A bit more about them. We knew that Andrew became a merchant, and he emigrated  to New Zealand in the 1860s. In fact, this inquiry started with the family from New Zealand, wondering about their Graham ancestors. Andrew’s daughter, Rhoda, was born in New Zealand; and it was her grandchildren who contacted us.

Going back in time, we find another John Graham, born in Kittochside in 1755. His father John lived at Limekilns, very close by. From newspapers and other sources, we found all sorts of things about the family. John was nicknamed ‘Parsnip Jock’. The Grahams introduced Ayrshire cattle into Kilbride, and married into other prominent families in the area.

I’ve also highlighted Patrick, because after completing this work, I found another living person who also descended from these Grahams.

In due course, the Graham descendants from New Zealand came over, so we made contact with the current owners. They very kindly showed them round, including the extensive restorations of more recent years. And, the current owners got a lot of pleasure out of meeting descendants of people who’d lived there so long ago. A win-win situation for both parties.

Some very interesting stories about what happened in the past.  If you would like to get in touch, we can do research, either on your house or on your ancestors. We do a free consultation. If you give us brief information about what you know, we have a look, and come back to you with our suggested options. That way, you know what it will cost, and we know how far to go with our research. You can get in touch via our Contact page, or you can email info@researchthroughpeople.com. If you want, give me a phone on my mobile number 07810 370312. I’d be delighted to hear from you. George English