We’ve made lots of videos. The ones that get the most views are the ones about surnames. Often that is the start point for people getting interested in family history.

Once you get interested in surnames, how do you go from there to researching your family history and finding out more about what happened in your ancestors lives?

Local Surnames The official name is a toponymic, place name. But they may be to do with all sorts of places or features. And you see common names here, Hill or Wood, London, Glasgow, places like that. And nationality, Scott and Fleming.

Surnames of Relationship A son might take the first name of his father. In England, they tend to add ‘son’ on, as in Johnson. In Scotland, ‘mac’ means son, so that goes at the beginning of McDonald. And in Wales, what they tend to do is just make a possessive plural name, such as Jones or Williams. In Ireland, O’Brien means grandson of.

Surnames of Occupation or Office In most places, there was a smith, a tailor and a baker, and that’s what distinguished the person.

Nicknames All kinds of nicknames were given to people. Brown, they had a dark complexion. Short, strong, etc. Campbell means twisted mouth in Scotland.

Most of these could be adopted by anyone. So, it is unlikely that there will be a blood relationship just because the name is the same. 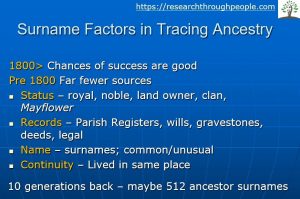 Your surname plays a key role in the success in tracing your ancestors. Chances are good going back to 1800 because there are many available records, such as the official registration of births, marriages and deaths. Before then, there were fewer sources.

Status was a big factor in determining if you can get back 3, 4, 500 or more years. Obviously royalty was tracked and recorded. For particular groups, such as a clan or Mayflower descendnats, the hard work has been done on the family way back.

Records, of course, are key. Before official registration, it was church parish registers which started in the 1500s. Wills, gravestones, deeds and legal papers help if they can be found.

Name. An unusual surname is much more likely to be traceable.

With surnames, if you go back 10 generations, you may have as many as 500 different ancestors’ surnames through your father’s and mother’s lines. 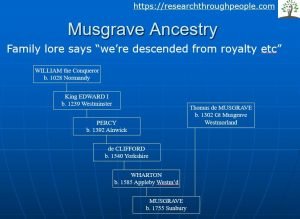 The Musgrave family had traced back to the 18th century. We were then able to trace the Musgraves, who were a noble family, back to Westmorland in the 14th century. With royalty, or similar, the line must go back through at least one of the wives’ lines. It turned out the Musgraves had married into the Wharton, de Clifford and Percy families. Mary daughter of King Edward I, had married Henry de Percy. If you get back into royalty, there’s a very good chance that you will get back to William the Conqueror.

Are you a member of a clan? 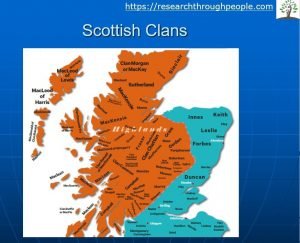 Another type of example is where someone’s done the hard work of tracing the family very early on. That is often the case with a Scottish clan. A Clan map shows where that clan lived in the past.

Of course, a lot of clan members were not blood relations, but fealtic members who had joined for loyalty and protection. 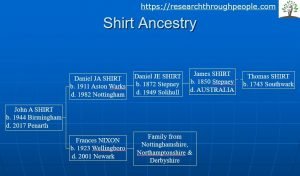 Let’s look at some examples. Family lore may say that you’re descended from royalty or someone famous. Sometimes that is correct.

But such cases are not common. Often, you come to us and we trace back in time, with little knowledge of your past. There are always surprises. Like the Shirts.

John Shirt was born in Birmingham, and went to live in Wales. His dad was born near Birmingham, but his mother’s family came from the Midlands’ counties of Northamptonshire, Nottinghamshire and Derbyshire.

Going back on the Shirt side, we found that they came from the East End of London, and then south of the River Thames  in the 18th century. An ancestor emigrated to Australia.

That’s what happens. So many different places, stories and lived. You come to us, we look back in time and it’s amazing what we find. That’s what family history is about.

If you’ve been interested in where your surname came from, please get in touch. It’s natural if you’re not sure about what may be involved, or wonder what it might cost

So, what we do is ask you to send us brief details of what you know. We then have a look, for free, and assess the situation and chances of success. We’ll come up with a number of options. Then you can make an informed decision of which option suits you.

This is one of the many videos on YouTube that we have made. Please get in touch for your free consultation. You can navigate directly to website and talk to us today. We look forward to helping you and bringing your ancestors and your family to life.