Taylor Swift and me – how cousins become distant 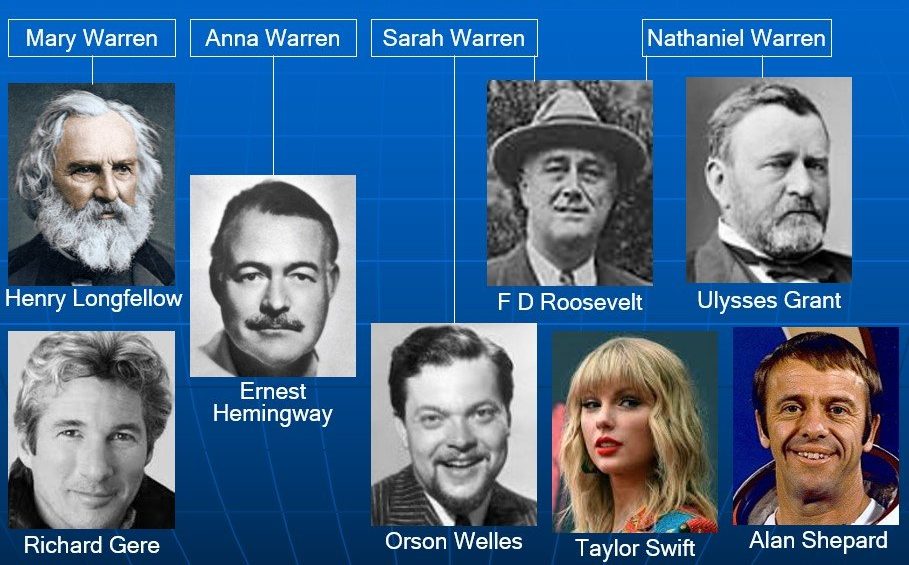 Our video ‘What do Taylor Swift, Richard Gere and I have in common?’ generated a lot of comments. The answer is that we are distant cousins who had an ancestor who sailed on the Mayflower in 1620. Here at Research Through People, we get a lot of questions about distant cousins. So today we are releasing an update about ‘How Cousins become distant’ using Taylor Swift’s genealogy as an example.

Like all cousins, Taylor Swift’s genealogy and mine is the same from our Most Recent Common Ancestor back in time. Clearly, you and your first cousins will have many more ancestors in common. We can help to bring those ancestors to life for you.

Most of us know who our first cousins are. It’s at the 2nd cousin level that contact may be lost, often because they live many miles away.

So let’s look at Taylor Swift’s Family Tree and mine. Taylor is my 8th cousin, 1 time removed.

Here is an actor playing our common ancestor, Richard Warren, who was a passenger on the Mayflower that carried the Pilgrims to New England in 1620. Richard left his wife Elizabeth and 5 young daughters behind in England, and they did not join him until three years later. In Plymouth, they had 2 sons, including Nathaniel Warren, Most Recent Common Ancestor of Taylor Swift and me.

Taylor Swift’s Family Tree and mine

Taylor Swift’s Family Tree and mine show that her ancestor Alice Warren was born in 1656; and mine, Mercy, the next year, 1657. You can imagine that the two sisters played together a lot as children.

Alice Warren was the first to get married, to Thomas Gibbs in 1674 in Sandwich, some 20 miles down the coast from Plymouth, in what is now Massachusetts. Mercy Warren followed in 1677, marrying Jonathan Delano, in what was then Dartmouth, now Fairhaven, 30 miles south of Plymouth.

So already Alice and Mercy’s families were apart. With transport as it was then, one wonders if they ever saw each other again. Alice’s daughter Abigail Gibbs stayed in the area, but then her son Nathaniel Gibbs moved more than 100 miles west to Litchfield in Connecticut. Meanwhile, Mercy’s son Thomas Delano stayed in Dartmouth,

Captains in Connecticut and Nantucket Island

Both of their grandsons were made Captains, but different types. Nathaniel Gibbs became Captain of the 2nd Company of the Trainband (militia) in Hartford, Connecticut in 1755. Thomas Delano moved to Nantucket Island and, in 1760, became a whaling captain. His son Captain Henry Delano emigrated to England in 1785, putting many miles between Taylor’s descendants and mine.

So, even though you’ve probably never heard of them, these families are coming to life, just as in a story.

At least something of our ancestors were left behind. The gravestones of Jonathan Delano and Nathaniel Swift are still there.

So, you and your distant cousins share some of your family history. If you would like to know more about this, have a look at the Ancestor Footsteps page.

In my own family, we found that a 3rd cousin had a Family Bible that we knew nothing about. We’ll come back to making contact with Living Relatives in a future video. If you would like to know more, please contact us for a free consultation.

As Taylor Swift says in her song, I wonder if her and me will ever ever ever be getting together?

PrevPreviousWhere Does Your Local/Place Surname Come From?
NextHow to Break Down Brick WallsNext