400th Anniversary of the Mayflower 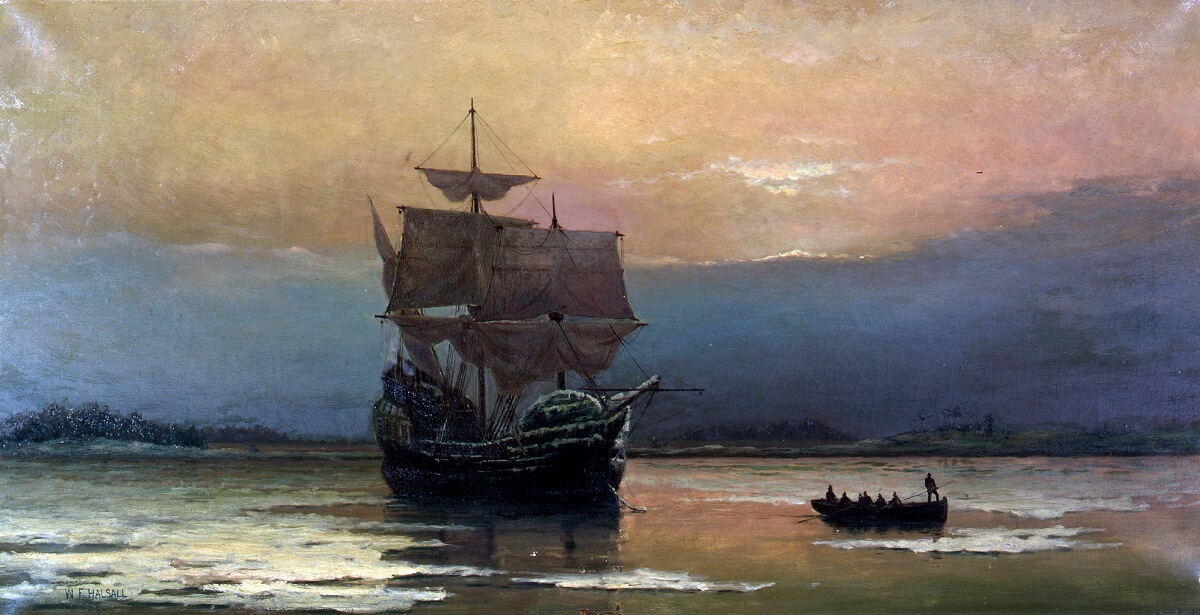 400 years ago, 102 passengers set sail from England to the New World on a ship called the Mayflower. Among the passengers was Richard Warren, one of George English’s ancestors This 5 part video has been made about the events during the Reformation leading up to “most influential journey in western history”; the voyage itself, and the enormous impact the Mayflower’s voyage has had ever since

1 The Mayflower and the Reformation Two events around the turn of the 16th century led to an astonishing sequence of happenings that caused the sailing of the Mayflower more than 100 years later. In 1492, Columbus discovered America for the Spanish, though he did not know that was what he had found! Then, in 1517, Martin Luther nailed 95 theses to the church door in the German town of Wittenberg, which started the Reformation which would lead to religious, social and other changes in England and elsewhere. The Church of England changed from Catholic to Protestant under Henry VIII. Queen Elizabeth tried to follow a ‘middle way’ which promoted Protestantism but with forms of worship which would allow Catholics to compromise.

2 The Mayflower and the Separatists The Reformation also had an enormous effect in other countries such as Scotland, Spain and the Spanish Netherlands. Strangers’ Churches were set up in England for the Protestant refugees from the Spanish Netherlands. A Puritan sect known as the Separatists were unhappy with the ‘middle way’ of Protestantism. Many of the Pilgrims on the Mayflower (‘Saints’) came from Scrooby and Gainsborough in the Midlands of England. .the Nottinghamshire area. When private religious meetings were banned under James I, they decided to leave England.

3 The Voyage of the Mayflower The Separatists went first to Holland in 1608; and went from Amsterdam to Leiden the following year. Later, they decided to go to New England in 1620. The venture was financed by a group of Merchant ‘Adventurers’ in the hope of large and quick profits. Many non-religious passengers (‘Strangers’) joined the voyage, including Richard Warren. The Mayflower was designed to carry cargo, not passengers. It was battered by storms; and seasickness was rife among the passengers. ‘The Voyage that Made a Nation’ took 66 days until land was sighted off Cape Cod.

4 The Mayflower and the Pilgrims The people native to the region were the Wampanoag. They would prove crucial in the survival and progress of the Pilgrims. In these days of Coronavirus, a comparison is that the Wampanoag had been decimated by plague, known as the ‘Great Dying’ of 1616-19. They would have had little idea what was happening – or of any way of tackling it. Half of the Mayflower passengers died of scurvy and other disease in the first year. Meticulously investigated books, published by the General Society of Mayflower Descendants, are available for many of the Mayflower Passengers known to have living descendants, including my ancestors Richard Warren, and Philippe de Lannoy/Philip Delano who sailed on the Fortune in 1621.

5 The Mayflower and Western Civilisation Gradually, the settlers established the community in the Plymouth Colony. In autumn 1621, they held a Thanksgiving for the good harvest after crops were planted in Spring, and their survival, attended by 90 Wampanoag. Over the next 4 centuries, the process begun by the passengers on the Mayflower would have a profound effect on Western civilisation. This included the 1707 Act of Union between England and Wales, and Scotland.

Can We Help You Find Out About Your Ancestors?

At Research Through People, we give a free consultation if you would like us to research your ancestors. We suggest options so that you know how much it’s going to cost; and we know how far to go with our research. For Mayflower 400, we’ve currently got a 10% introductory discount – just quote ‘Mayflower400’. We look forward to hearing from you.

PrevPreviousAmerican and Canadian Ancestor Stories
NextWhat do Taylor Swift, Richard Gere and I have in common?Next